I have been lucky enough to grow up in a household where religious beliefs can be discussed, understood and accepted without conflict. This also extends to politics, science, climate change, philosophy… Really any topic which could cause conflict can be discussed and analysed without fear of being mocked.

My mother was the first person to introduce me to Tarot cards. She had a deck of Angel Cards which I always thought were beautiful. They had lovely brightly coloured images, gold lining and were very pure and clean. As I grew older I did some research on the origin of modern Fortune Telling Cards which have been interpreted with gemstones, fairies, spirit guides, animals and even mermaids and unicorns.

But they all have the same constant in that they aim to provide clarity without judgement.

So, when I discovered the original Rider-Waite Tarot Deck I immediately bought a copy and began to read my mother’s second-hand books on Tarot (specifically The Complete Guide to Tarot by Juliet Sharman-Burke, published 1985 – which I will be using as my major reference in this post series).

However, I have always remained sceptical. I believe that the cards are filled with a rich history full of myths and legends, and are beautiful and fascinating. But I do not believe people should use them to dictate their life choices (like some do with Horoscopes). Tarot is for guidance and clarity – not necessarily for answers. The answers come from within.

Now that I have justified this new post series I plan to write, here is where it all begins.

The Fool’s Journey follows The Fool through his life, education, love, conflict and death, and helps make Tarot easier to understand. The Fool is the hero of the story. The Fool is you.

The Major Arcana are ordered as per The Fool’s Journey as follows:

The Wheel of Fortune

The Fool is someone at the very start of an unpredictable journey full of difficult trials, but they are excited at the adventure ahead of them. It is a journey full of discovery and growth. They are innocent, pure, blessed and protected. The Fool ultimately signifies a need to abandon the old and begin something new. 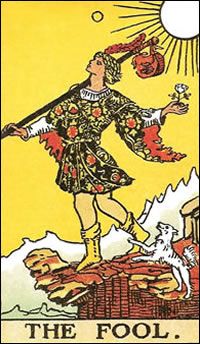 I love analysing the imagery of the cards, and once understood this is the key to being able to read a Tarot spread.

The Fool is the central figure. He is an image of youth, freedom and untapped potential. He is dressed freely in bright colours and his arms are outstretched as if embracing the world. The Fool is impulsive and confident. He carries a staff with a small sack, indicating that little is required for the journey ahead (or that everything required is already available from past experiences) and a white rose symbolising purity and innocence.

He stands on the edge of a cliff, prepared to step off the edge without fear. We cannot see what awaits the Fool beyond the cliff, and the Fool’s upturned face suggests that he too is unaware or uncaring of the change ahead. He is calm and confident in the face of the unknown.

The Fool’s companion, a small white dog, leaps excitedly beside him. Warning him of the danger ahead, but more than willing to accompany him on the journey. The small white dog is a protector and guide.

In the distance jagged cliffs and mountains appear sharp and dangerous. Clearly a difficult terrain to travel upon, signifying an equally difficult journey ahead. However, below the cliffs is a small green valley which is far more inviting. Perhaps the end result of the difficult journey? Above the sun shines brightly and the sky is cloudless.

The Fool is a very identifiable figure and can signify an unexpected change, opportunity, or the potential for escape and adventure. The Fool ultimately signifies a need to abandon the old and begin something new. The result is unpredictable, but the journey will be one of growth and adventure.

Hope this was interesting and informative,

Have a nice day!

3 thoughts on “The Fool’s Journey I: The Fool”